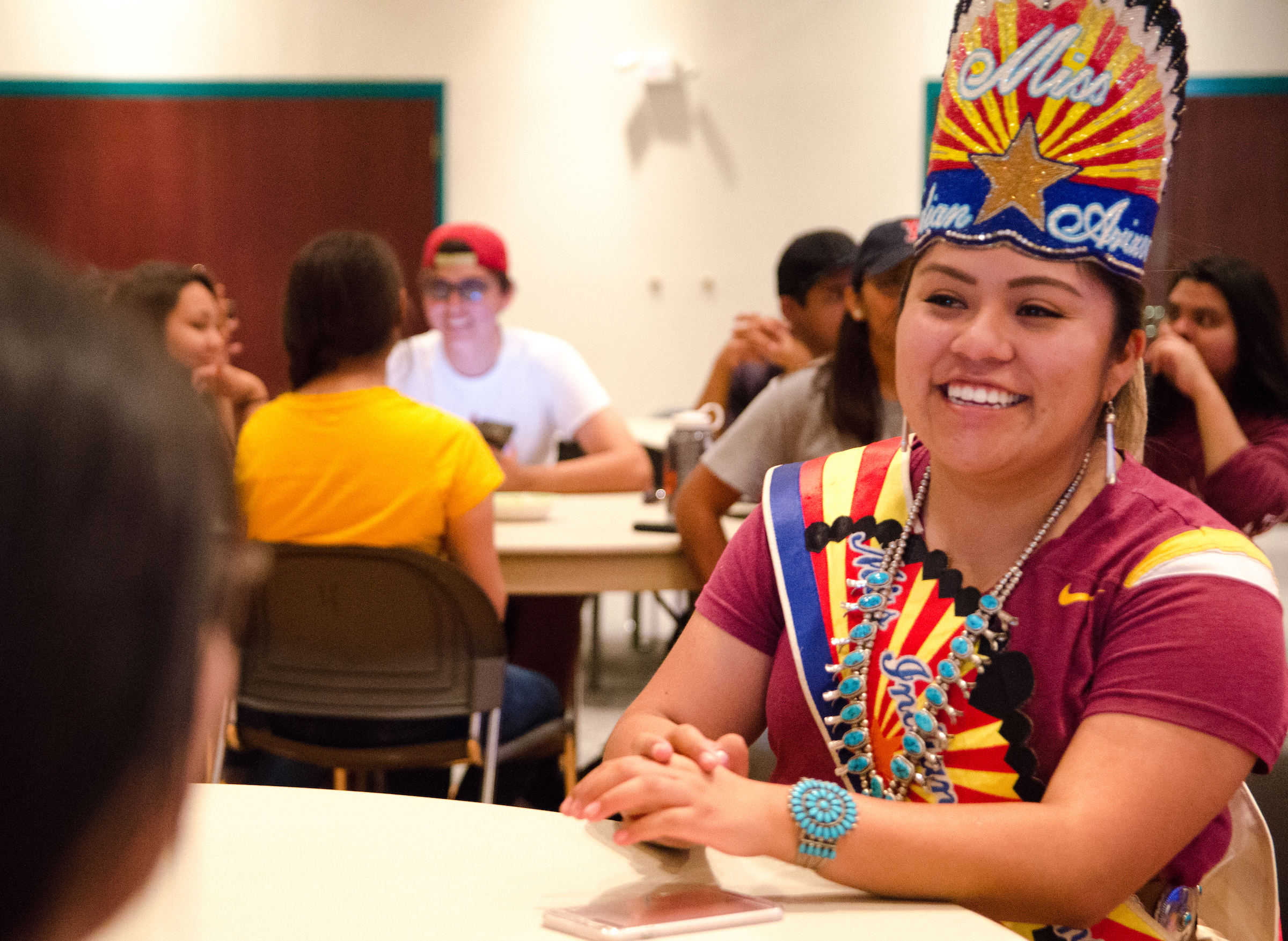 A team of ASU students, faculty and staff travelled recently to the Fort McDowell Yavapai Nation to give one-on-one attention to young people and to encourage them to seek a college education.

Nearly 50 students, athletes and staffers visited the reservation this as part of an annual outreach program called the Tribal Nations Tour, which brings ASU to schools with high populations of American Indian students throughout the state. Each year, the tour presents several topics related to wellness, college readiness, career preparation and the pursuit of academic degrees.

They also offered up a day of community service, performing cleanup and painting duties in preparation for Orme Dam Victory Days celebration, which starts Friday and runs through the weekend.

“It’s important to bring educational awareness to Native communities and be able to say, ‘This is where you could be, and this is how you can help your tribe to evolve and prosper in the future,’” said Zach Doka, a junior at Arizona State University who is involved in the Tribal Nations Tour.

Doka grew up on the Fort McDowell Reservation and says he was blessed with good parents who stressed education, but that doesn’t mean he wasn’t aware of obstacles facing Native youth.

“Our young people face a lot of hurdles,” Doka said. “Loss of our language, and culture is dwindling because of outside influences. It’s important that ASU came here today to show they care.”

University students took a tour of the reservation to learn about traditional and contemporary Yavapai culture, history, activism, gaming issues, as well as a brief overview of the Orme Dam controversy that locked the nation in a battle with the U.S. government 40 years ago.

The proposed dam would have flooded a large portion of the reservation and forced tribe members to relocate. The tribe defeated dam proponents in November 1981, and this weekend they will celebrate 35 years of social and economic gains.

Annabell Bowen, director for the Office of the President on American Indian Initiatives, said the purpose of the trip was twofold — to show support to all of Arizona’s 22 tribal nations, and to repay a kindness to Fort McDowell.

“This is a way to give back to the community for recognizing their contribution and what they have given to ASU,” Bowen said.

ASU’s Wassaja Scholarship is part of a $1 million gift that was donated from the Fort McDowell Yavapai Nation. This scholarship is designed to support ASU American Indian students, and it ranges from $500 to $800 per student per semester.

Bowen said the tour first started in 2010 and has visited all of Arizona’s federally recognized tribal nations. She said these trips have paid big dividends to the communities and the university.

"I have bumped into many students on campus who have told me, 'I remember when you came to my high school, and you're the reason we're here,'" Bowen said. "That's an example of how the Tribal Nations Tour has impacted and inspired students in the past."

Amber Poleviyuma was one of the students on the tour.

“Our Native communities made us who we are and made it possible for us to be here today,” said Poleviyuma, a nursing major. “I also enjoy learning the history of other tribes and the issues they still face today.”

ASU has one of the highest American Indian populations in the nation with more than 2,000 students and is a leading university in the country for awarding graduate degrees to Native students.

The opportunity to engage with the Native American community, using ASU athletes as role models and allowing them to gain a cultural perspective, is why ASU Associate Athletic Director William Kennedy has participated in the Tribal Nations tour since it began in 2010.

"A lot of what we do involves elementary school children, and regardless of ethnicity, they certainly look up to and will listen to athletes," said Kennedy, who brought the entire ASU lacrosse team and ASU basketball player Vitaliy Shibel.

Shibel, who is a native of the Ukraine, said it was his first time on a reservation. He was fascinated by the Yavapai way of life and culture.

“Here people live as one community, and everybody in the Ukraine is all for themselves,” Shibel said. “They are not selfish and care for each other.”

Care was the one word that resonated most with 15-year-old tribal member Amanda Vanegas, who is a sophomore at Fountain Hills High School.

"I'm so happy everyone came today because it really inspires me," Vanegas said. "Hearing other Natives talk about their backstories and their struggles helps me feel more confident in myself. If they can make it, so can I."

Last year the tour visited the Navajo, Hopi, Yavapai, White Mountains Apache, San Carlos and Tohono O'odham nations. Bowen said next year they plan to expand their outreach outside Arizona in states such as California, New Mexico and South Dakota.

"Our goal is to maintain our relationships and continue outreach to students," Bowen said.

Top photo: Shaandiin Parrish, an ASU senior majoring in political science, talks to another student at the Fort McDowell Reservation on Nov. 5. Parrish was crowned Miss Indian Arizona in October and is part of the outreach effort to Arizona’s 22 Indian tribes. Photo by Anya Magnuson/ASU Now