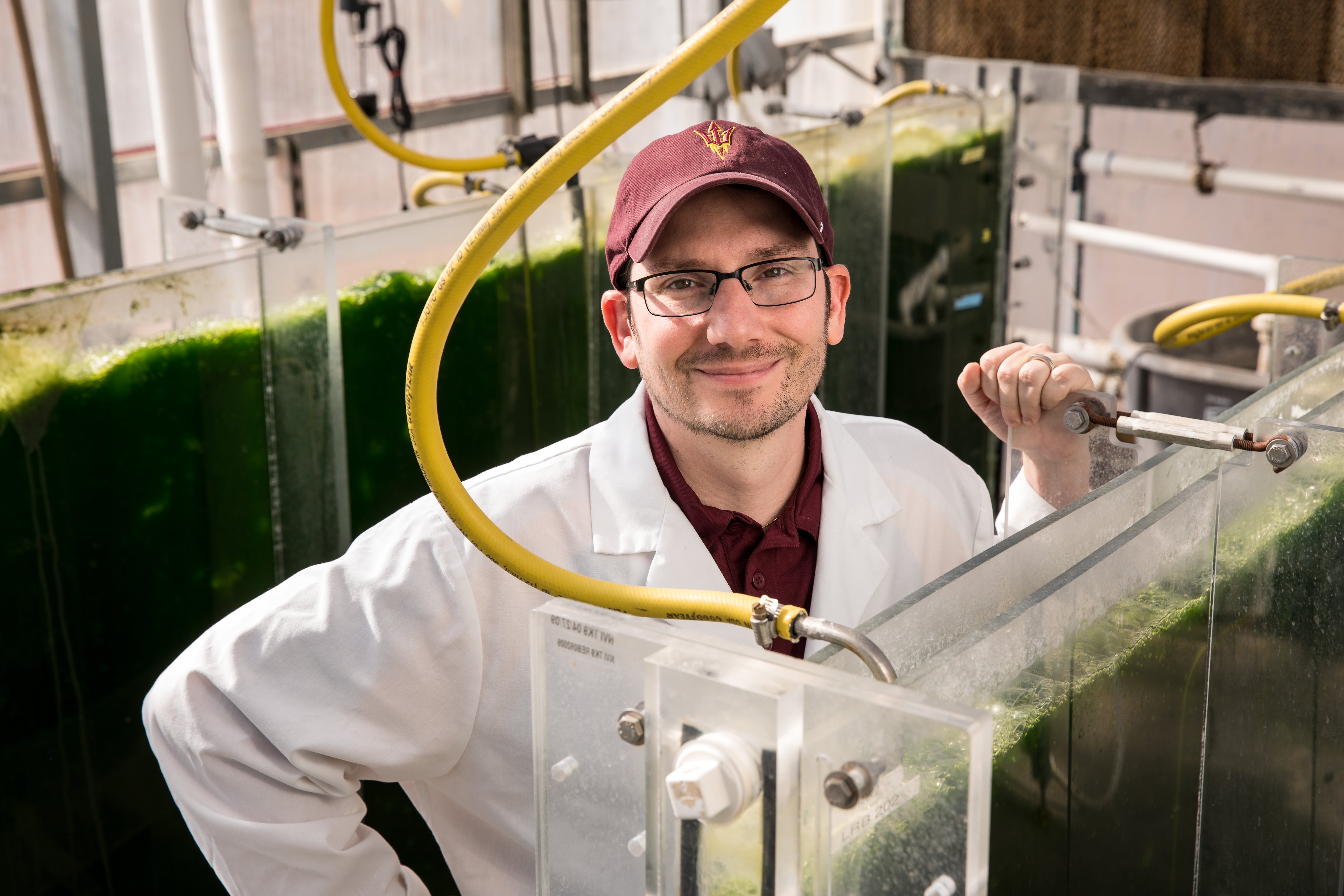 The world is awash in discarded plastics. A recent estimate of the amount of plastic in Earth’s environment puts it at 6.3 billion metric tons (of the 8.3 billion metric tons that have been mass produced since the 1950s). This includes what is in landfills and what floats around in our rivers, lakes and oceans. Some plastics can take up to 400 years to degrade.

What can be done to change this situation? ASU Assistant Professor Taylor Weiss says one way would be to make 100 percent biodegradable bioplastics that would dissolve in the environment in a matter of months.

His idea is to use bacteria to make plastics, specifically employing cyanobacteria, a photosynthesis-happy bug, as one of the starting materials. Weiss recently published a paper in Metabolic Engineering that outlines a new production method that would be powered by cyanobacteria and the naturally occurring Halomonas boliviensis.

Weiss recently joined ASU’s Polytechnic campus, where he will work on scaling up the process at the Arizona Center for Algae Technology and Innovation (AzCATI). Here, Weiss describes his idea for making environmentally friendly bioplastics.

Question: What are the issues with today’s plastics?

Answer: Plastics fall into two very distinct categories: Those that can be melted down and reused, and those that cannot. Recycling some plastics can save energy, but all plastics don’t ultimately degrade like biological materials down to “nothingness” or become metabolized by a living creature. Most plastics degrade like rocks: They just break down into smaller and smaller pieces that accumulate in the environment.

Q: The plastics you produce are 100 percent biodegradable. Over what time frame?

A: Degradation times depend on the object and conditions, but bioplastics typically break down faster than plant celluloses, like wood. With lots of biological activity, like in a compost pile, fibers and films will biodegrade within two months. The human body takes about three months to completely dissolve bioplastic suture threads. Something like plastic utensils in the ocean would take longer, but still be unrecognizable within a year.

Essentially, because the average usage-lifetime of a disposable plastic bag in the U.S. is 12 minutes, yet take hundreds of years to degrade, we're looking to bioplastics to create the benefits of disposability without the long-term negative consequences.

Q: How do you make these bioplastics?

A: We created a symbiotic partnership between two bacteria, each specializing in a specific task. The cyanobacteria use photosynthesis to create sugar and are engineered to constantly excrete that sugar. A second bacteria (Halomonas boliviensis) then consumes the sugar to alternately grow and produce bioplastics in cycles. Additionally, the cyanobacteria are captured in hydrogel beads (made from seaweed extract) that are submerged in saltwater filled with the bioplastic-producing bacteria.

Q: What is the advantage of this process?

A: In the big picture, we don’t use resources better spent on food production (fresh water and farmable land) to first grow a crop that can be processed into sugar and then fed to the bacteria to make bioplastics. We’ve done this by efficiently bringing together two bacteria species that are among the best on Earth at making sugar and bioplastics.

Trapping the cyanobacteria in a hydrogel is also critical — it means that the same cyanobacteria can be reused instead of regrown, and because the trapped cells barely grow at all, energy otherwise spent on growth can be redirected toward even greater sugar production. As a bonus, the system seems to stand up to contamination. We didn’t tightly control the system to keep out contaminating bacteria, or add chemicals to kill them. What contamination was present simply didn’t interfere — for more than five months — because our bioplastic-producing bacteria was simply so good at consuming all of the sugar.

Q: What needs to be done to make the process industrially viable?

A: The cyanobacteria, the Halomonas boliviensis bacteria and hydrogel have already been industrialized, so each has a lot of proven potential. Using as little of the hydrogel as possible and for as long as possible needs to be further explored. That will help keep costs down. Bringing all these elements together and in real-world conditions at large scales needs to be done. Fortunately, we have a one-of-a-kind academic test bed facility here at AzCATI that is uniquely suited to answer the remaining production questions and push development of the technology.