I was born and raised in a small rural community in Midwest Ohio. I had only left this small community a handful of times before going off to college -- also in Midwest Ohio. Over the years, my normal was represented by snow-covered winter mornings, humid summer days, and the trees growing their leaves only to have them fall to the ground several months later. When I moved to Boston, what I knew as normal didn’t change much. There was a bit more snow on the ground, and I had to walk a lot more, but the seasons were still pretty moderate with the exception of a few unbearably cold winter nights and a number of ‘sticky’ summer days.

My normal changed when I accepted the UI Fellowship.

On July 9, 2018 I arrived at my new apartment in Tempe, Arizona. A beautiful complex within walking distance of the Chicago Cubs Spring Training stadium, I thought I was in heaven! The sun was shining without a cloud in the sky. There were palm trees along the drive up to my building, two different pools within a two minute walk of my doorstep, and college-aged men and women walking their dogs in the shade. I was wondering why it took me so long to leave the blistering cold and come to this land of endless sunshine!

But that’s when it hit me!

A BLOWDRYER! OR WAS IT A FLAMETHROWER! Wait, no, that was just me stepping out of my car in the 115 degree Arizona weather for the first time! 115 DEGREES! It literally felt like someone had turned on a blowdryer and was blasting me in all directions. I was stunned! The worst part, there was still humidity! I was promised a “DRY” heat! What was this madness!?!?!

For the remainder of the day, I questioned whether I had made the right choice or not. My roommate had the AC set at 82 degrees and mentioned that we could “keep it that low until I got adjusted to the heat, then we’d need to put it back up a bit.” WHAT!?!?!? My body was used to 70 degrees in the house year round -- no matter the temperature outside. How was I supposed to carry all my boxes up 3 sets of stairs in an oven? Well, I did, drenched in sweat. After I got everything inside, I went to the store to grab a few items. I was only inside for 30 minutes but came out to my leather seats ready to melt my skin. (You quickly learn that Sunshades are not an option if you plan to park outside). I couldn’t believe what was happening.

The heat was enough. But then came the Haboob! Have you ever heard of a haboob? Do you have even the slightest idea what this gut-wrenching term could mean? Well, a Haboob is what death’s doorstep looks like. It’s a wall of dust, up to 60 miles wide and 2000 meters high. They can move at speeds of around 45 miles per hour and wreak havoc on anything in their path. (You can check out a picture of one below). I was in my house, minding my own business, when the haboob came through my first evening -- scaring me nearly to death. You see the winds approach first, the sky darkens, then a wall of dust approaches! Honestly, it’s like something out of a movie. When I lived in Ohio, I hadn’t even heard of these weather patterns and now I was being thrown into the middle of one. The whole thing only lasted about an hour, but I was ready to get in my car and head home at this point!  (In truth, haboobs really just leave everything covered in dirt/sand, but they look super scary your first time). 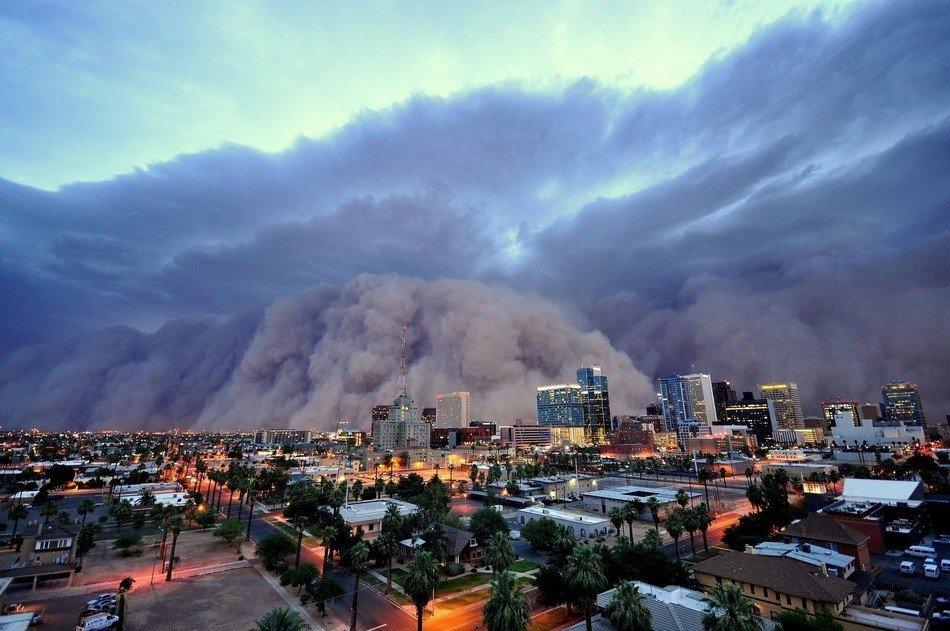 After the dust settled, the heat again became unbearable. But this time, it was late at night. In the Phoenix area, temperatures can remain above 90 degrees the entire night. I tend to keep my bedroom pretty cool, but I quickly learned that I would need to have several fans facing me at night -- even with the AC on.

With all that being said, my body adjusted to these temperatures quicker than I thought it would. After a few weeks I wasn’t too worried about the heat and had figured out how to navigate in the crazy temperatures. The businesses know how hot it can be and have fans and misters at nearly every outdoor location. I also began to do some traveling to cooler parts of the state, like Sedona and Flagstaff, and found that the quick weekend trips were good for my physical and mental health. I hung out at the pool after work, even into the winter months. I was sunbathing and hitting up the hot tub on January 3rd this year -- something I never thought I’d do my entire life. I began to enjoy the warm evenings and was even able to eat Thanksgiving dinner on the porch while wearing shorts and a t-shirt. My friends visit constantly to escape the midwest and new england winters and a few will even be coming out shortly to watch some baseball in February. Honestly, although it took a few weeks to adjust, Arizona is the best place I’ve ever lived. While this post might have been a bit dramatic, and the heat can be a serious struggle, I’ll take a few months of heat over those winter snowstorms any day.

Tips on how to survive in a place where humans aren’t supposed to live: